Jack DeSalvo
is an American jazz and classical guitarist, composer, multi-instrumenalist and producer.

"When you listen to Jack DeSalvo, it’s immediately apparent that he has an enormous musical vocabulary. Renaissance classical, garage rock, straight ahead jazz, downtown skronk and traditional mandolin melodies are all part of his musical DNA. But when you hear DeSalvo improvise on classical guitar, you’re hearing music of that precise moment. He has many influences (and there are as many poets, philosophers and thinkers as there are musicians)..." – Mitch Goldman, WKCR 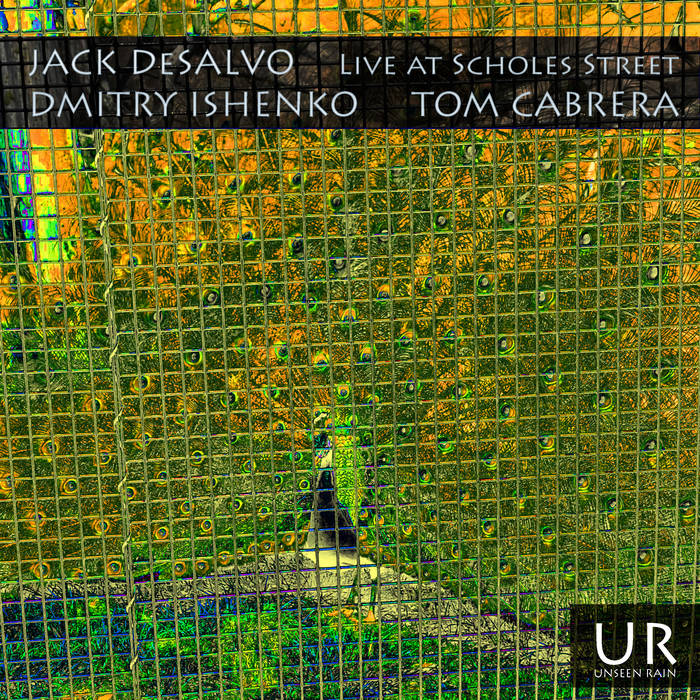 This live performance was part of a night of trios at Brooklyn’s Scholes Street Studio/performance space that was curated by Matt Lavelle. Tom Cabrera and Dmitry Ishenko are among my favorite musicians to play anything with, but an opportunity to perform my own compositions with them is particularly gratifying. As a trio we have two previous albums on Unseen Rain – Minerals and Volume III of the Connoisseurs of Chaos series though some of the tracks on this live record where originally recorded on earlier albums of mine. – Jack DeSalvo It takes a trio of formidable players like DeSalvo, Ishenko and Cabrera to bring to life music like this, with its multi-hued harmonic atmosphere and these musicians’ clairvoyant interplay.  JACK DeSALVO – guitar DMITRY ISHENKO – double-bass TOM CABRERA – drums 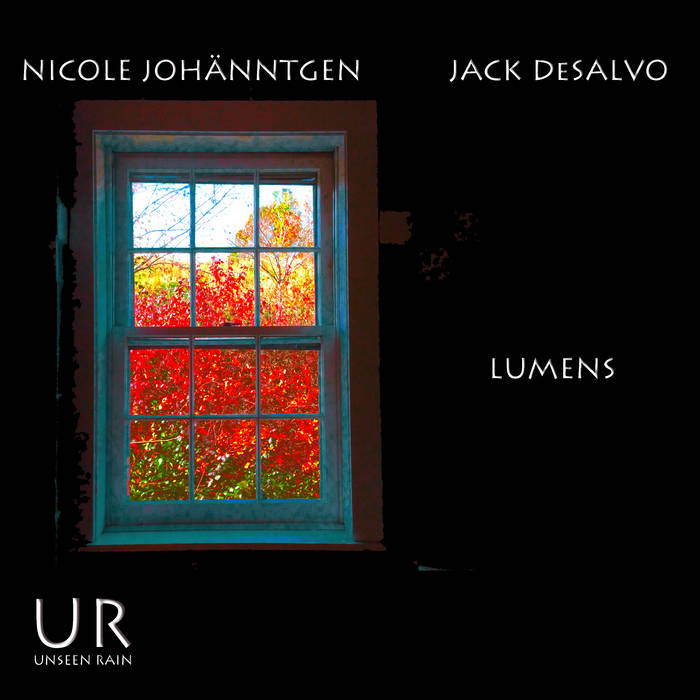 “I have been completely bowled over by this album since it arrived for review a few weeks ago. A real gem of a recording by two musicians that I had not previously encountered, but whose compatibility and empathy seemingly knows no bounds.” – Nick Lea, Jazz Views Lumens is an important recording by Nicole Johänntgen and Jack DeSalvo, two composer/instrumentalists who met in Matt Lavelle’s 12 Houses orchestra in New York. The album features alto saxophone and guitar in gorgeous soundscapes as well as simple, deeply felt songs. “Nicole has something very special in her playing – a big and generous heart. She plays like her life depends on it and draws anyone within range into the center of her music. An exceptional energy!” – Dave Liebman “Nicole is a truly spirited and vibrant player who has a true and pure artistic integrity. Obviously music means everything to her and this translates to me and surely to many more people.” – Lew Soloff Zürich based German saxophonist Nicole Johänntgen is ubiquitous at European festivals and clubs whether with her long time ensemble Nicole Jo, Henry – her New Orleans group or her quartet. Nicole Johänntgen – alto saxophone Jack DeSalvo – guitar 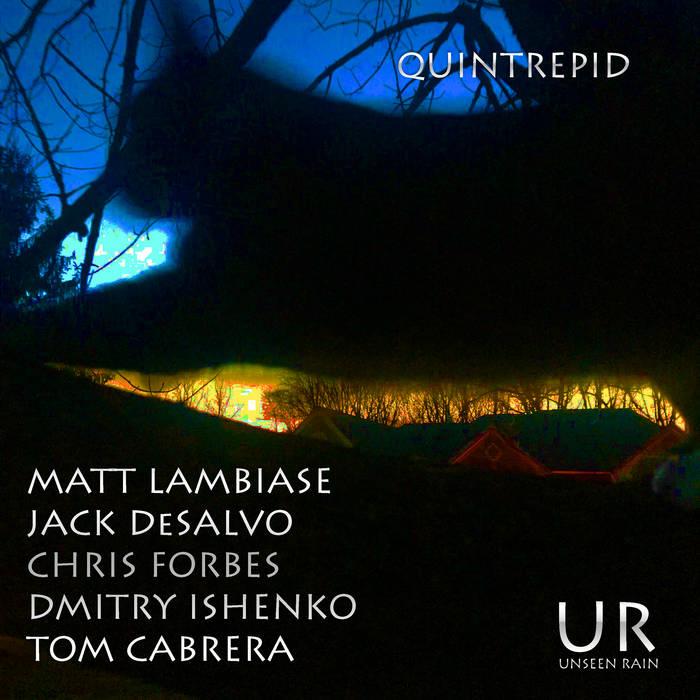 This is the debut album Quintrepid by the quintet of the same name. This intrepid ensemble of some of New York’s preeminent improvisers presents music that is arresting in its depth yet holds an unmistakable allure. Matt Lambiase, who has been compared to legends like Kenny Wheeler, sticks to flugelhorn for these mesmerizing tracks, guitarist and composer Jack DeSalvo colors the proceedings with his unique harmonic sense. Chris Forbes’ powerful pianism and compositions, the melodic and virtuosic double-bass of Dmitry ishenko and the adventurous, swinging drums and percussion of Tom Cabrera indeed form an intrepid unit creating an album of revelatory beauty. MATT LAMBIASE flugelhorn JACK DeSALVO guitar CHRIS FORBES piano DMITRY ISHENKO double-bass TOM CABRERA drums 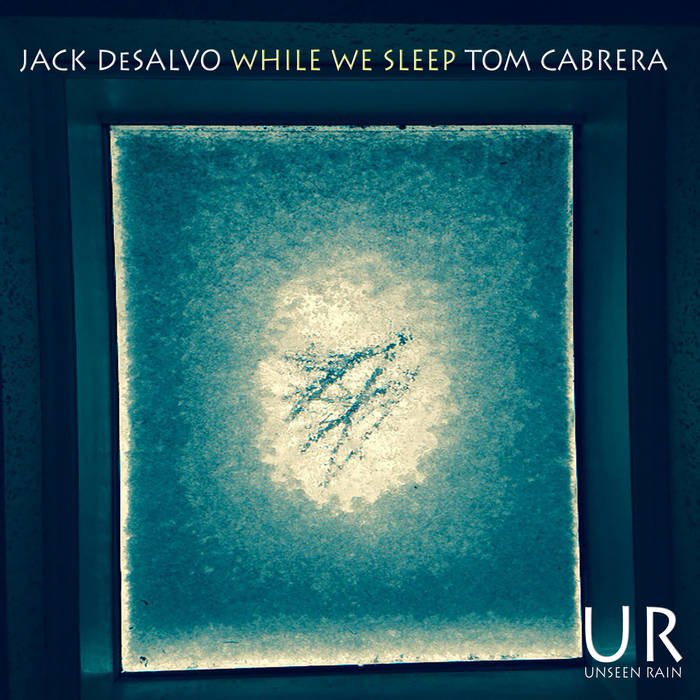 While We Sleep is this duo’s fifth album. DeSalvo and Cabrera’s first offering was recorded 27 years ago and their near-psychic interplay has only grown from their long association, the myriad groups these two perform in together notwithstanding, While We Sleep is a different take on what’s possible when you have two multi-instrumentalists of this caliber in the studio. They took this oppotunity to present Jack’s highly sophisticated yet appealing compositions with a full ensemble treatment. Tom Cabrera plays drum set here but also is in the role of additional percussionist, the combination of which creates a world of sounds and rhythm. Guitarist Jack DeSalvo plays a host of string instruments, creating layers of texture and completing their ensemble, on occasion a septet, a quartet, a trio and on two tracks, solo. For the listener, While We Sleep is a journey into a vision realized by consummate artists – recorded, mixed and mastered in High Definition sound. Jack DeSalvo – classical and steel-string acoustic guitars, cello, mandola, banjo and bass ukulele Tom Cabrera – drum set, doumbek, riq, frame drums, cajon, Muffintop Drum, percussion